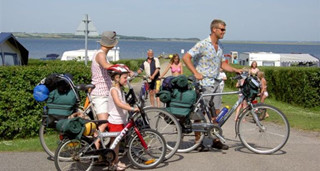 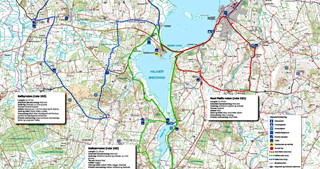 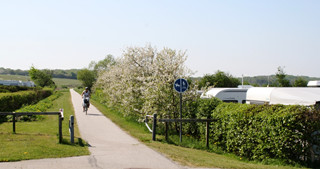 Cycling holiday by the Limfjord

If you want to have a cycling holiday in North Jutland, we at Nibe Camping can help you with accommodation in both cabins and rooms, or you can bring your own tent at the campsite, where we has kitchen with dining areas and outdoor kitchen in connection with our covered barbecue area. We will help you find bike routes in the area.

From the North Sea to the Kattegat - or vice versa, if it fits better with the wind. The wind goes well over the waters of the Limfjord, but if you take the whole trip around, there should also be a chance for back wind. The latest shot on the national cycle route follows the coasts of The Limfjord around sea ports and fishing villages through North Jutland (235 km), Viborg (295 km) and Ringkøbing counties (80 km). Along the dunes and behind the cliffs, past large flat salt marshes and over Vejlerne, which is one of Northern Europe's most important bird areas.

From Aalborg, drive towards Nibe along the flat stretches along the fjord, which widens into the broads - first Gjøl widening followed by Nibe widening and finally Løgstør widening.
From Nibe to Løgstør pass Sebbersund, which was originally a Viking trading place and where today there is the opportunity to visit an exhibition building about the Viking Age and a reconstructed mining house.

Read about the nature trail from Nibe to Hvalpsund here
Plan your route at www.cyclistic.dk, which is a nationwide route planner for cyclists. Can also be used on the mobile.

"Snapseruten"
You can combine a bike holiday with several different types of accommodation, both at campsites and inns and hotels.
The snap route is the Limfjord country's response to France's "Route de Vin", Germany's "Weinstrasse" and Scotland's "The Whiskey Trail". It's just not the liquor, but the variety of herbs that can taste it, which is "the red thread" in the Snapseruten. At Snapseruten you can experience both the untouched nature and the man-made cultural monuments. You can also take a walk on one of Snapseruten's 6 routes, where you can visit one of Snapseruten's 10 eateries.